SORRY, OUT OF STOCK & NO INVENTORY AT THIS TIME
This animal is not available for hunting on our ranch for the foreseeable future.

You can totally enjoy Black Hawaiian Sheep hunting at our V-Bharre Hunting Ranch but you might run into some controversy on the way. The topic? Just where did these hairy sheep come from? (We know.) Don’t worry. There’s no controversy big enough to get in the way of the adventure you’re going to have when you sign up for one of our Black Hawaiian Sheep hunting packages. 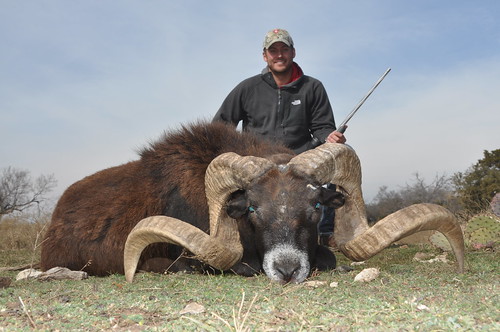 Think the beautiful Black Hawaiian Sheep came from Hawaii? Nope. They came from Texas. Now wait a minute – this is not Texas braggadocio. It’s true.

Some very enterprising breeders put a few Mouflon sheep together with a wide range of domestic sheep and a few months later out pops a beautiful black sheep — the pride of any family. However, rumors and legends persist about their origin. “Black Hawaiian Sheep were first introduced to Hawaii by Captain Vancouver in the late 1700’s.” Wrong. Sheep were introduced to the island, but not Black Hawaiian Sheep. “Sailors put these sheep off in the Hawaiian Island so that they could have fresh meat when they returned.” Nope. 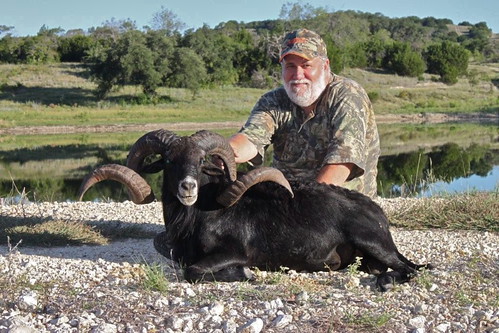 To put the matter to rest, here’s the very diplomatic response from the Hawaiian Veterinary Medical Officer from the Hawaii Department of Agriculture-Livestock Division.

“…There exists no native breed of Black Hair or Black Wool Sheep to cross with the Hawaiian feral population of Mouflons in order to create a Hawaiian native sheep. While there may have been found beautiful all black sheep on Hawaii… [we] have no knowledge of any sheep on the island resembling the Black Hawaiian sheep.” Now that that’s settled, on to the Black Hawaiian Sheep hunts.

Black Hawaiian Sheep have two coats that they shed – an upper coat of velvety black hair and a black, wooly-looking undercoat which sheds in warm weather. During the summer the black coat may look reddish due to sun bleaching.

The average height at the shoulder is 21 to 31 inches for males and 20 to 27 inches for females. The rams weigh between 60 and 150 pounds (the females weigh half that). The big trophy is not only their tasty meat, but the male’s unusual and beautifully curved horns that range from 20 inches to 39 inches. These horns grow back, down, forward and out and are a milky brownish color. They’re a real exotic trophy prize.

SORRY, OUT OF STOCK & NO INVENTORY AT THIS TIME
This animal is not available for hunting on our ranch for the foreseeable future.

BEST TIME FOR BLACK HAWAIIAN SHEEP HUNTS – OCTOBER THRU APRIL, BUT CAN BE HUNTED YEAR ROUND

Complimentary with All of Our Black Hawaiian Sheep Hunts

NOT Included with All of Our Black Hawaiian Sheep Hunts