Shelby from West Virginia booked a hunt at V Bharre Ranch in search of a 40″ male Oryx and a gold medal Addax. Little did he know he would later smash the SCI world record Oryx with a crossbow. I personally had the pleasure of guiding this accomplished outdoorsman. I soon realized Shelby does not care about world records or awards for his accomplishments. He has several B & C whitetails he has never entered. What he does care for is a quality, challenging hunt. Rather it’s hunting mountain goats, grizzly’s or stalking Oryx with a crossbow, Shelby loves the woods. On day 2 of our hunt Shelby and I quietly stalked a group of Oryx. After several minutes, maybe an hour we selected the one we felt was best for the harvest. Over the next several minutes Shelby carefully judged the wind and yardage on this beast of a Oryx. Pushing the safety forward, taking a deep breathe the crossbow fired. The arrow found both lungs. “Great shot, absolutely perfect”, I said. Shelby made a 46 yard shot in a cross wind. Not bad…. 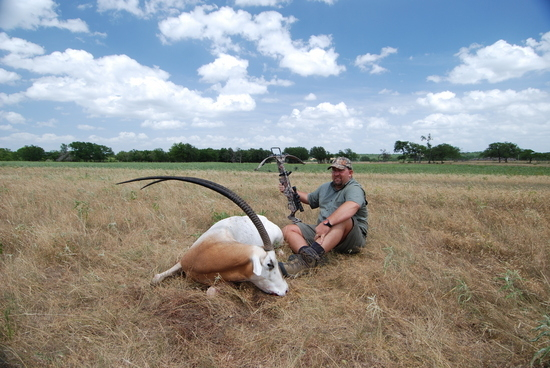