Scimitar Oryx, also known as the Horned Oryx, is a fast, clever and strong antelope with a temper that hunters should match. Scimitar Horned Oryx hunting offers a challenging and magnificent experience and to be able to enjoy Scimitar Oryx hunting and take home the most precious harvests, there are important facts that you should know. 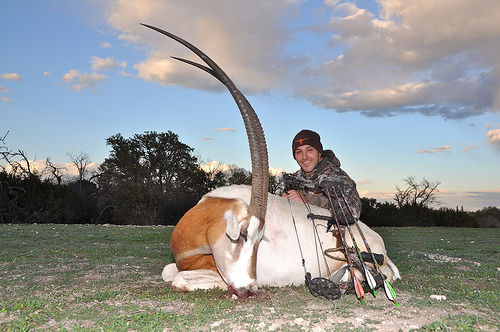 This article discusses some of the most important facts that will help you with Scimitar Oryx hunting.

The Scimitar Oryx is known for their ringed, long, graceful, curved horns that can grow up to 40 inches in length. Horns are present on male and female Scimitar Oryx.  It is white with a chestnut neck and chest. This large and beautiful animal once populated almost every part of the North African continent. It is easy for Scimitar Oryx to survive to survive in extreme heat and can even go for weeks without water. They can weigh up to 400 pounds and have the ability to make a 180 degree turn making it easy to attack the predators that are stalking them, to the point that sometimes their attack results in the stalker’s death.

The Scimitar Oryx is a native of North Africa.  It was during the 1970s when they were imported into Texas, and ironically, it became the salvation as they are almost extinct in Africa today, while in Texas 10,000 and 12,000 wild Scimitar Oryx are estimated to be roaming in Texas. Scimitar Oryx are now extinct in the wild but they have increased on various hunting ranches in Texas.

Females give birth to a single calf that weighs about 10 kilograms about eight to eight and a half months after mating.

Based on scientific studies, the Scimitar Horned Oryx are capable of surviving in the wild for up to 20 years.

According to history, the scimitar horned oryx lived in herds consisting of 20 to 40 indivduals and is led by a single male. While during migrations and times when water is abundant, herds of 1,000 or more can be seen. Scimitar-horned oryx are also known for their interesting way of coping with water shortage. They have the capacity to raise their body temperature by up to 116 degrees Fahrenheit and can even conserve water by avoiding sweating.

Scimitar Oryx Hunting raised controversies because these animals are listed as endangered species. But it turned out that a strong economic incentive helps in preserving Scimitar Oryx because Texas ranchers exerted serious efforts to preserve and propagate these exotic animals.

Come to V-Bharre ranch to experience a very special opportunity to hunt a large and beautiful animal. Enjoy a one of a kind Scimitar Oryx Hunting experience and come home with a trophy that you will definitely be proud of.